It occurs to me that the “twitterpated” scene in Bambi told a much more concise story of “some bros make a pact to stay from women and then they all more or less instantly break that pact” than William Shakespeare did.  Love’s Labour’s Lost is, if nothing else, long as hell.  (Long Love’s Labour’s Lost?)  It’s an absolute barrage of punnery and wordplay from start to finish, to the point where even I had to say enough.

Long-time readers of this Shakespeare Re-Read series have learned to place bets on when I’ll include this next criticism within one of my posts, so if you had the third graph, then winner winner chicken dinner for you.  Anyway, my main issue with LLL was that, you guessed it, it was a chore to read (but I’m sure great on the stage).  Page after page of long, elaborate speeches just became a bit much.  I never thought I, king of the dad jokes, would ever read anything and claim there were simply too many puns, and yet here it is.  It’s like Homer being trapped in hell and being made to eat all the doughnuts in the world — he could take it, but like James Coco, I quickly went mad at this nonstop feast of intricate dialogue. 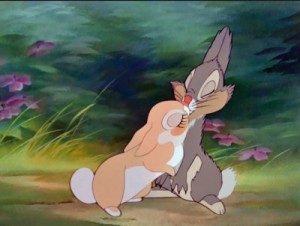 As you’ll recall from childhood, that scene from Bambi is maybe five minutes long.  LLL takes a much longer time to make its same plot point, and while some of Shakespeare’s comedies are notoriously thin on plot, this one is essentially a one-joke premise.  Navarre and his three lords swear up and down that they’re devoting themselves to study and foreswearing women, not unlike George Constanza in that one episode of Seinfeld, or me on involuntary terms during high school and university.  (Sigh)  It doesn’t take a brain surgeon to guess what’s going to happen next to deflate these four windbags, so now the only drama is in seeing just how they’re going to get their joint comeuppance.

This was my first time reading LLL and at this point, I was pretty amused.  Surely ol’ Billy Shakes had some classic farce in store for this most basic of premises.  Instead, what happens is…the French princess and her three ladies show up, the guys all more or less instantly fall for them, the girls know it and want to jerk them around a bit with a verrrrry laboured costume-and-character plot, the guys are all dolts and it all ends in a happy ending when everyone reveals their love.

Or wait!  No, it actually ends with the French king dying and everyone essentially hitting the pause button on love while the princess returns to France to settle all the affairs.  All of these labours for love have been lost, for now, in the name of family obligation.  It’s a strange ending, like Shakespeare pulling a record scratch on all this frivolity and perhaps transitioning the characters from lovestruck fools to adults with actual issues.  The princess is now, presumably, her country’s head of state.  If she’s marrying the King of Navarre, suddenly you have an official union between the two countries and a power shift in European politics.  So Navarre not only foregoes his desire for a semi-ecclesiastic study, he may not even get to enjoy love if he’s thrown into a political mess.  Lord knows that kings and queens in Shakespeare’s works never seem to be having too much fun.

The rather abrupt ending stands out even more considering it caps off what is literally the longest scene in Shakespearean dramatic history.  My copy of the play has Act V, Scene ii clocking in at a cool 1003 lines, during which a million ridiculous things happen that are supposedly borderline amusing.  The whole thing feels, perhaps intentionally, very laboured — between all the disguises and the performance-within-a-play aspects, it feels like Shakespeare is lazily spoofing himself rather than give this play a proper denouement.

Perhaps fittingly, LLL’s sudden shift to tragedy in its ending forecasts a shift in my Re-Read schedule.  I’m not doing this in any particular order, except for one significant decision that will become clear shortly.  What I’m saying this, LLL is our last comedy for a while, so it’s maybe a bit unfortunate that we’re going out on this too-clever-for-its-own-good note.

My New Year's resolution for 2012 was to re-read (and in some cases, read for the first time) all 38 of William Shakespeare's plays.  2012 has long since ended, but still, onward and upward.  And, since in these modern times it's impossible to undertake a personal project without blogging about it, here are a series of reviews/personal observances I'll make about the plays.  Well, 'reviews' is a bit of a stretch.  It's William freakin’ Shakespeare.  What am I going to tell you, "Don't bother reading this one, folks!  What a stinker!  Ol' Mark doesn't like it, so you should definitely believe ME over 400 years of dramatic criticism!"
Posted by Question Mark at 9:33 AM