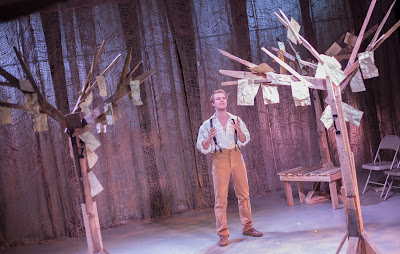 More like “As You List It,” amiright?  Shakespeare is of course famously known for using every literary device in the book (plus inventing a few new ones), yet in this play, he falls back again and again on the device of a character making a point or telling a story by going through a list of items.  Or, similarly, dialogue that repeats itself with only slight variations.  Just a few of the many, MANY examples…

* Touchstone describing the seventh cause (Act V, scene iv)
* Rosalind confirming Orlando/Phoebe/Silvius’ promises (V, ii)
* Jaques’ story of the fool (II, vii)
* Touchstone describing the difference between country life and court life to Corin (III, ii)
* Even the play’s most famous moment, Jaques’ “all the world’s a stage…” monologue, is in fact essentially a list of items.

Obviously, the Bard is using this repetition to comic effect, both for callback purposes and creating jokes from the slight variations between the entries in each “list.”  Between the repetition, the lists and the actual songs and poems used by the characters themselves, Shakespeare is in essence turning the entire play into a repeated list.  It’s like he’s giving us a list of options for the audience to choose “as we like it.”  If that wasn’t enough, Shakespeare also kind of meta-mocks himself for falling back on his device, via Touchstone mocking Orlando’s lame rhymes about Rosalind in his tree-poems.

The cumulative effect is a play that (all together now) would unquestionably seem better in performance than in the text.  I realize I say this about pretty much every play I didn’t really like, in part because I’m giving Shakespeare the benefit of the doubt but really because that might be the true demarcation line between a masterpiece and a regular Shakespearean play.  Something like “Othello” is great to watch or read, whereas AYLI suffers a bit on the page.  The cumulative effect of list after list over five acts gets a bit monotonous.  Any of the lists or repetitions by themselves are, as you would expect, pretty brilliantly clever, but the sum total of all of them is exhausting.  It’s like watching Michael Jordan do fade-away jumpers for three hours; sure, it’s a great move, but also a bit frustrating since you know the genius has more in his repertoire.

This was my second time reading AYLI though I have zero memory of my initial exposure to the play.  (I’m presuming it was back in university?)  As you can tell, it clearly made a big impression on me!  Reading it now, it struck me as something of a poor man’s version of “Cymbeline” in that both plays are borderline farcical pastoral comedies except AYLI doesn’t quite have that same all-out absurdity.  Cymbeline builds its farce into a plot, where AYLI has one of the flimsier skeletons of a story going.  Both of the main drivers of the action (Duke Frederick banishing Duke Senior and Oliver wronging his brother) are completely resolved off-stage and in a “well, that wrapped itself up quite nicely” kind of way.  Duke Frederick apparently has one of Mr. Burns’ trademark changes of heart and decides to restore Duke Senior to power, whereas at least Oliver gets a monologue explaining how he saw the errors of his way when Orlando saved him from a lion attack.

I’ll repeat, a lion attack!  This is up there with “Exit, pursued by a bear” in the Shakespearean canon.  I wish more pieces of literature resolved the main plot by having the villain be saved in cartoonish fashion by the hero.  Had Gatsby saved Tom Buchanan from, say, a zeppelin crash, I feel like Tom would’ve been totally okay with Gatsby’s unrequited love for his wife.

Rosalind is often held up as perhaps Shakespeare’s best female character, though I was a bit underwhelmed.  She’s a good character but the best?  Spending much of her time in a gender-bending costume subplot that even Olivia from Twelfth Night would’ve felt was a bit much?  It probably didn’t help that Orlando de Boys* was kind of a non-entity, between his lousy poems and “sure random guy I meet in the forest, I’ll woo you how I would woo my lost love, that’s not a weird idea whatsoever” attitude.  Were it not for the lion rescue, I’d be tempted to write Orlando off as a character altogether.  Dude’s got some cojones, I’ll give him that.  If my brother was being attacked by a lion, I’d be running so fast that I’d get to the bookstore in time to purchase their last copy of “Coping With Loss.”

As noted, any of the repetitive speeches taken individually are quite clever and this play does indeed have quite a few memorable moments.  Jaques* and Touchstone are the highlights, no question, and I feel like Shakespeare knew this in writing.  The subplot of Touchstone randomly trying to get married almost feels like Billy Shakes felt Touchstone and Jaques were so carrying the comedy that he needed to contrive a way to get into some scenes together.  It’s like the 16th century version of Harold Ramis realizing that Bill Murray and Chevy Chase didn’t have any scenes together in Caddyshack before hastily throwing together that scene of Ty Webb playing night golf.

* = I curse Shakespeare for not just naming him ‘Jacques’ since I have typed the name with that spelling literally every single time in this post and had to go back to correct it.  Zut alors!

I looked this up online to confirm, and indeed my greatest wish is true — Alan Rickman played Jaques at some point in his career.  Talk about perfect casting.  Jaques is a great invention, forever bitter and preferring to eternally bemoan his situation rather than actually take action.  Even at the play’s end, after complaining all along about having to live in the woods due to following Duke Senior, he ends up going after Duke Frederick, who has gone off in religious solitude.  Why return to the splendour of court life when you can whine about poor living conditions?  Jaques is hilariously pessimistic.

All in all, I only kinda liked it.  “As You Kinda Like It” doesn’t exactly roll off the tongue as an ideal title.

My New Year's resolution for 2012 was to re-read (and in some cases, read for the first time) all 38 of William Shakespeare's plays.  2012 has long since ended, but still, onward and upward.  And, since in these modern times it's impossible to undertake a personal project without blogging about it, here are a series of reviews/personal observances I'll make about the plays.  Well, 'reviews' is a bit of a stretch.  It's William freakin’ Shakespeare.  What am I going to tell you, "Don't bother reading this one, folks!  What a stinker!  Ol' Mark doesn't like it, so you should definitely believe ME over 400 years of dramatic criticism!"
Posted by Question Mark at 7:07 PM