Though four acts and three scenes, I was quite pleasantly surprised with this so-called weaker play in the Shakespearean canon.  Sure, it lacked some polish, but overall, it was a pretty interesting story with some funny and moments and it was all leading up to a big finish.  I was all set to cite Two Gentlemen Of Verona as a great hidden gem…

…until the ending.  And yeah, suddenly TGOV's low standing with the critics made a bit more sense.  That tricky plot and the web of relationships amongst the characters was all wrapped up in a mere 179 lines of Act V, Scene iv and yeah, it's not nearly enough.  Even by the traditional comedy standards of marrying everyone off for the happy ending, it's quite abrupt.  In those 179 lines, Shakespeare manages to completely undercut the fairly complex play he's woven in the previous four acts and three scenes and leave everyone saying, "wait, what?"  I can only chalk it up to inexperience, as TGOV is one of Shakespeare's earliest plays and he hadn't quite figured out advanced dramatic ideas* like, y'know, endings.

* = he also hadn't figured out things like "fewer racist bits that really stand out as glaring and awful for people reading these plays several centuries later."  Not to mention avoiding general misogyny, which we'll get to in a bit.

As a time capsule, however, TGOV is pretty interesting since it's almost like a coming attractions trailer for the rest of Shakespeare's work.  There are a lot of echoes of future plays in here --- Proteus' "villain as seemingly trustworthy nice guy" is reminiscent of Iago; Julia's cross-dressing disguise and pretending to be a servant for her love recalls Viola; Speed and Lance are hints at more fully-formed comic relief down the road like the Dromios of "Comedy Of Errors" or maybe even Dogberry of "Much Ado About Nothing."  It's like Shakespeare had some of the ingredients but he hasn't fully learned the recipe yet. 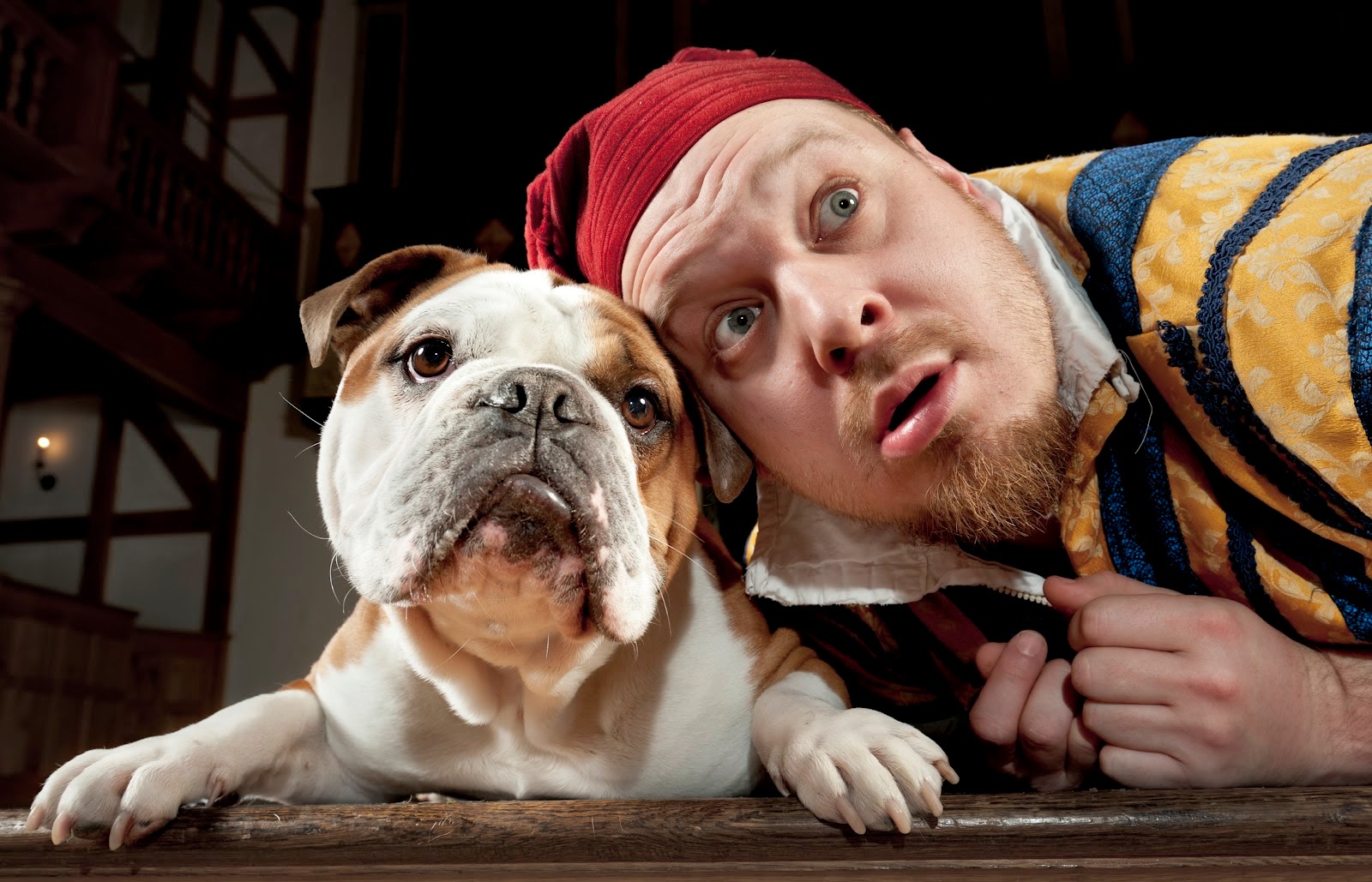 And it's SO CLOSE to being a legit classic play.  Here's how I saw things wrapping up….Silvia and Valentine would still end up together, Proteus gets his comeuppance, and Julia ends up marrying valiant ol' Sir Eglamour.  Sure, that would've been the definition of quickly falling in love since the two literally hadn't shared a scene together (and actually don't in the entire play) but that hasn't stopped other Shakespearean couplings in the past.  Eglamour* does something brave or he smacks Proteus upside the head, Julia is impressed, and boom, love at first sight.

= let's talk about my man Eglamour here, who is presented as one of Silvia's suitors early in the play and then pops up to help her escape into the forest to pursue Valentine.  Clearly, Sir Eglamour wasn't a defender of the realm so much as a defender of the friend zone.  To make matters worse, he proceeds to disappear from the play between he and Silvia taking off in Act V.i and her being captured by the Outlaws in V.iii.  What the hell happened to Eglamour?  Did the gang kill him?  Sheesh, lots of dark stuff happening in this comedy.

Sixty-odd lines into Act V.iv, this ending was still in play.  Silvia says she'll never love Proteus, he snaps and goes full-on rapist, and then Valentine swoops in to stop him and put him in his place.  Proteus then expresses shame at his actions and begs for forgiveness….and Valentine just goes ahead and forgives him.  As I said before, wait, what?  Then you have Julia revealing her true identity to Proteus, and basically this happens….

Julia: It's me, you unfaithful jackass!
Proteus: Julia!  Oh, I've been a fool.  You know how men are, with wandering eyes and whatnot.  Julia, now that I think about it and see you again, you're totally hotter than Silvia!  Forgive me?
Julia: Okay, sure!

Wait, what?  Proteus goes from being a sneaky, hatable villain to completely getting away with it within the span of about 50 lines.  It's like everyone just collectively shrugged and said "Oh, that Proteus!"  Of course, saying this actually would've given Silvia a line in the latter half of the scene.  Silvia says "Oh heaven!" in line 61, as a shocked response to Proteus trying to assault her, and then literally has no dialogue again in the rest of the play.  We never hear her reaction to, say, seeing Valentine again or seeing Julia revealed, or even having her father show up to give his blessing to all the marriage.  It's a sad undercutting of what had otherwise been a strong character earlier in the play.

And speaking of undercutting….Julia, man.  Even a poor man's version of Viola is a fascinating character, and she's maybe the earliest example of a Shakespearean female who seems to have her own self and own interests rather than just being an object to marry.  All it took was a simple rejection of Proteus and boom, everyone goes home cheering Julia on (even if that quickie marriage to Eglamour happens).  Instead, she forgives Proteus for all his horseshit at a moment's notice.  Even for a comedy, it's a bizarre turn and not really justified or explained by anything Proteus does.

On the note, the ending sells out Proteus too, who (as noted) had a pretty terrific slowburn from romantic hero to villain over the course of the play.  Several of Shakespeare's comedies don't have an actual villain, per se, since it's usually just misunderstandings or dramatic irony that gets in the characters' way, but Proteus was making a solid case for himself.  Had he actually ended up being arrested or properly shamed, you could argue that the play is actually a tragedy from his perspective, as a man is simply undone by lust and stabs everyone he loves in the back in order to win Silvia.  Instead, he gets a slap on the wrist and ends up with Julia anyway, no worse for wear.  An ever-changing mind is literally hinted at in his very name so we're not surprised, but still, the utter lack of consequences is yet another reason the ending leaves such a sour taste in the mouths of the modern audience.

Oh, and I haven't even gotten to the worst moment --- after Proteus begs Valentine for forgiveness, Valentine's response is "aw, don't be so glum, bro!  You're still my best friend!  Hey, take Silvia anyway, go for it!  Bros before hoes!"  Now, it should be noted, I didn't actually interpret this dialogue* as Valentine literally giving Silvia away.  I thought he was just referring to how he was extending his own loving nature (like the kind he had with Silvia) to his old pal Proteus, and it wasn't until I was reading a bit of analysis about TGOV afterwards that I realized the more common interpretation, which is that Silvia is reduced to just a piece of property for Valentine to be offering to the man that was on the verge of attacking her just minutes earlier.  Yikes.

* = I was paraphrasing a bit, and "bros before hoes" is not original Shakespearean dialogue.

Here's the thing, I'm not sure "Valentine was giving her away" is that straight-forward a reading.  While Valentine is presented as a misogynist in the text, the one constant in his behaviour it that he really loves Silvia.  It's a stretch to even have him forgive Proteus, but what the hell, I'll roll with it; what I can't believe is that he'd forgive Proteus AND throw away Silvia.  Modern productions of this play try their best to smooth out the ending, and this one moment in particular; one version recast Valentine's "offer" as a last-ditch effort to prevent a despondent Proteus from committing suicide.  Other productions try to sidestep the misogyny and rapey vibe by making the rest of the play more overtly farcical so all the characters are just line-spewing goofballs and there's no hint of seriousness to anything.  Which…I guess it makes sense since it is a comedy after all, yet I feel like doing this would obscure the more interesting things that Shakespeare has going on under the surface.

Anyway, I've spent so much time unpacking this ending that I haven't mentioned the legitimately witty dialogue throughout, going from clever wordplay to the more broader elements of Speed, Lance and Lance's damn little dog.  Turio is an underrated comic dullard and the Outlaws were a blast to read, and presumably they'd be an even bigger hoot on stage.  The next time I'm mugged by a gang of hoodlums, I'll propose becoming their leader and see where it gets me.  Worked out well for Valentine!

Had the ending even been a D+ instead of an F-minus, history would regard Two Gentlemen Of Verona in a much kinder light, but them's the breaks.  There's still a lot to like in TGOV and despite that tragically misinformed ending, I'm still slotting it above a few other notable plays on my reading list thus far.  Complain if you will, but remember that I was a big fan of "Lost," so I'm used to trying to rationalize unsatisfying endings.

RANKING THE PLAYS THUS FAR
11. Pericles
10. The Taming Of The Shrew
9. Antony & Cleopatra
8. Much Ado About Nothing
7. Coriolanus
6. The Two Gentlemen Of Verona
5. The Comedy Of Errors
4. The Winter's Tale
3. A Midsummer Night's Dream
2. Julius Caesar
1. Othello

My New Year's resolution for 2012 was to re-read (and in some cases, read for the first time) all 38 of William Shakespeare's plays.  2012 has long since ended, but still, onward and upward.  And, since in these modern times it's impossible to undertake a personal project without blogging about it, here are a series of reviews/personal observances I'll make about the plays.  Well, 'reviews' is a bit of a stretch.  It's William goddamn Shakespeare.  What am I going to tell you, "Don't bother reading this one, folks!  What a stinker!  Ol' Mark doesn't like it, so you should definitely believe ME over 400 years of dramatic criticism!"
Posted by Question Mark at 4:22 AM