Much Ado About Nothing (Shakespeare Re-Read #5)

Well, it was bound to happen eventually.  Sooner or later though this Shakespeare re-read project I'd come across a play that really fell flat to me, and as fate would have it, the underwhelming play just happens to be the one with the title that ties most directly to its underachievement.  For as much as I vaguely enjoyed the idea of the play, and as much as I enjoyed my faint previous exposure to the story, this all ended up being much ado about, in my opinion, pretty much nothing.

The baggage surrounding the play may have admittedly built it up in my mind.  I'd seen the Kenneth Branagh film version years ago in high school and, while I remember little about it, I did remember enjoying it since Branagh and Emma Thompson were unsurprisingly awesome as Benedick and Beatrice.  (Well, maybe surprising in Branagh's case, since I usually dislike him as an actor…but really, the fact that the part was strong enough to make even Branagh look good was another point in the play's favour for me.)  And, MAAN has a pedigree as one of Shakespeare's best comedies, with an especially high caliber of witty wordplay, so theoretically, it should've been right up my alley.

Instead, nothing.  Don't get me wrong, it's fun to hear Benedick and Beatrice spar it out and then inevitably realize they're crazy about each other.  And that's the point --- it's fun to *hear* it.  When you have Thompson and Branagh, or Amy Acker* and Alexis Denisof, or any other accomplished pair of actors with chemistry to spare delivering the lines, it sounds terrific.  On the page, however, it lacks spark.  I return to my (already tired after just five posts) point that Shakespeare comedies work much better in performance than in reading, but at least with Comedy Of Errors and Midsummer Night's Dream, you could see the potential for comedy on the page.  With MAAN, the admittedly fantastic insults between Beatrice & Benedick only last for a little more than an act before they're set up 'in love' with each other and the rest of the play is bogged down by the machinations of the larger marriage plot.

* = In fairness, I may be also influenced by the fact that I may be kinda in love with Amy Acker.  Not deep enough in love to watch 'Person Of Interest' or anything, but still, lowercase-L love.

Roger Ebert coined the phrase "Idiot Plot" to describe a movie that fails because its plot is so contrived that it can only occur if the characters are idiots.  This is kind of the problem with MAAN since the central premise relies on Don Pedro and Claudio believing Don John's accusations about Hero's faithfulness.  Don John!  A guy who is both literally a bastard and non-literally opening referred to as a bastard!  A guy who has already tried once to ruin his brother and is now essentially being dragged around against his will like a sort of trophy by Don Pedro!  You don't think THAT guy might have an axe to grind?*  You can see the logistical flaw here when Benedick (in Act IV-i, 196-199) learns of the accusations and immediately realizes that Don John is behind everything, thus exposing this paper-thin scheme.

* = Don John, it should be noted, is a pretty sorry-ass villain.  On the scale of Shakespeare bad guys, he is a poor man's Edmund The Bastard and a homeless man's Iago.  And what kind of self-respecting villain has henchmen who roll over so easily?  Borachio squeals like a pig when he thinks that Hero is dead.**  To quote the Joker, you just can't find good help these days.

** = That's right, my digression has a digression.  Deal with it!  Anyway, the whole thing about Hero faking her death just adds a layer of unintentional comedy to this goofy-ass plot.  My favourite part about it is that the suggestion comes more or less out of nowhere from the Friar, a character the audience has known for all of about four lines.  Even if the family knows the Friar already, it's still amusing to the audience.  I'd be like if one of the gravediggers had chimed in with, "Hey Hamlet, keep an eye out for that poisoned sword.  I'm just saying, is all."

Of course, Pedro and Claudio don't immediately believe him, but are than totally sucked in by Borachio and Margaret's little pantomime, a scene that is described so abstractly that Shakespeare doesn't even bother to stage it, instead just having Borachio recap the thing to Conrade.  In the edition of the play that I read, it made note of the fact that MAAN was one of Shakespeare's more sloppily-written works in terms of stage directions.  Editors had a hell of a time over the centuries trying to work out the scenes and character groupings in a sensible way.  For instance, an early version had Leonato's wife as a character who was on stage but simply never had any lines or was referenced in any way, and the character of Leonato's brother (the old man who just loses it on Claudio and Don Pedro in Act V-i) has only been designated as Leonato's brother and Hero's uncle in hindsight, as Shakespeare was never clear about things. 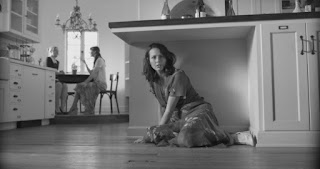 It's perhaps not a stretch to believe that ol' Will's inspiration for this piece was contained within the arguments between Benedick and Beatrice and everything else was more or less window dressing that even Shakespeare himself couldn't be bothered to fully pad out.  It's like, "Hey audience, just pretend what Pedro and Claudio saw was pretty damning, even if I couldn't explain it properly.  Just go with me on this one, I'm Shakespeare, thou aren't."  The idea that Don Pedro and Claudio are so scared of being cuckolded that they're willing to believe the worst about Hero isn't really reinforced that heavily in the early part of the text --- Benedick is the one who's all paranoid about "the horns," while Pedro and Claudio are more amused by him than in agreement with him, if anything.  And really, even if they are worried about Claudio being cuckolded by cheatin' Hero, that still doesn't excuse their glaring mistake of believing literally the most unreliable messenger possible.

Yes, B&B share some gold-star insults at each other and I could listen to them all day.  Yes, Dogberry and his band of incompetents are amusing, if used in exactly the right proportion before they became a distraction.  But in Midsummer Night's Dream, for instance, the labours of the main plot are overshadowed by the nonstop hilarity of the subplot with Bottom and the actors.  In MAAN, the great comic moments are too limited to overthrow the Idiot Plot.

Now, in performance, these dumb plot points can be elegantly glossed over, ignored or turned into comic moments themselves.  I had the pleasure of watching Joss Whedon's adaptation of MAAN at the Toronto International Film Festival this year and yes, this means I finally went to a TIFF screening after living in Toronto for the better part of seven years.  How it took so long is anyone's guess.  Anyway, as both a Shakespeare lover and a borderline Whedon fanboy, this picture was a must-see, and indeed, it was adorable.  Even if you aren't familiar with Whedon's shows and aren't squealing in delight over all the Buffy/Angel/Firefly/Dollhouse actors popping up, it's still a very canny adaptation of the play that irons out several of the flaws.*  For instance, we actually see a bit of Borachio's pantomime on camera, and while it still doesn't make a ton of sense that Claudio would actually buy it, Fran Kranz and Reed Diamond (playing Claudio and Don Pedro) sell it with righteous fury in the wedding scene.

* = Except one thing didn't make sense to me.  In the fifth act, Claudio has begrudgingly agreed to marry Leonato's mystery niece and says that since he's bound by honour to do so, he'll go ahead with it no matter what she looks like, even "were she an Ethiope."  Yikes.  This is definitely one of those instances where you have to acknowledge that Shakespeare was writing over 400 years ago when racial attitudes were, well, racist.  What I don't get is why Whedon includes this line in the film!  Claudio says it and there's a black woman quite notably framed next to him, so Whedon is clearly acknowledging the absurdity of the line, but its very inclusion and sheer WTF-ness in this the year 2012 just comes off as jarring.  The other red-flag line in the play (Benedick badmouthing Jewish people at the end of Act II) was cut, so why leave this one in?  Unless, of course, Joss Whedon is secretly racist.  That must be it.  That's why Mr. Trick was so unceremoniously killed off in the third season of Buffy.  I'm onto you, Whedon.  This also explains why there weren't any black Avengers…uh, except Nick Fury.  Ok, this theory has a few holes.

This all said, one terrific film doesn't overtake my overall quibbles with the play's structure.  I so badly wanted to love MAAN but instead finished the reading feeling somewhat disappointed.  Is this a lesson for me to keep my expectations tempered for future plays?  It sure it.  Will I very possibly ignore this lesson and write "Folks, this play didn't live up to its billing" for some future Shakespeare post?  Almost certainly.

RANKING THE PLAYS THUS FAR
5. Much Ado About Nothing
4. Coriolanus
3. The Comedy Of Errors
2. A Midsummer Night's Dream
1. Othello

It's better that you read these instead of waiting for a weight-loss blog, since brother, that ain't happening.  The 'before' picture alone would break the internet.
Posted by Question Mark at 4:00 AM