I'm just throwing this out here right now: the fifth act of "A Midsummer Night's Dream" has a case as the funniest scene in the Shakespearean canon, and also weirdly, the most funny to our modern sensibilities.   It would've been easy enough to just have the three couples sit in dumbstruck silence as Bottom and company went through their terrible performance, but Shakespeare literally has the couples go all Statler & Waldorf on this shitty performance.  Mystery Science Theatre 3000 owes its entire existence to the fifth act.  Demetrius chirping Snout's performance as the Wall is a legit laugh-out-loud moment and there's even a callback later in the scene.  Unintentional comedy, callbacks, chirping…it's like Shakespeare invented the DVD commentary track centuries beforehand.

The fifth act (and really, the entire Bottom subplot) is the highlight of a play that isn't quite tossed-off, but yet seems intentionally tossed-off.  As Puck says in the closing lines, if you don't like it, just pretend it was all a dream -- which, of course, is a joke unto itself since the play isn't "real" by any stretch.  AMND is Shakespeare at his most frivolous, having people fall in and out of love at the drop of a hat and/or a droplet of magic potion, sending up the entire comedy convention of a happy ending wedding and literally wrapping the main story up early so the entire climactic fifth act is simply an add-on of pure comedy. 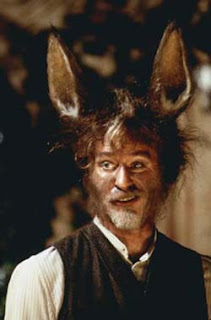 The problem with being intentionally frivolous, however, is that it tends to makes a piece easy to dismiss.  In reading AMND, I was so taken with the Bottom subplot that the actual story (the two couples and the fairy gods and Puck and whatnot) was really just kinda there.  Like a fairy itself, all the mythological stuff between Theseus, Hippolyta, Titania and Oberon more or less flew over my head.  It's almost as if Shakespeare *really* wanted to write a straight send-up of theatrical performances* but didn't have enough material to pad out the basic "these guys want to put on a show/they don't know what they're doing/the show is terrible" idea so he just built the entire AMND plot around it.

* = Dollars to doughnuts that Bottom, Quince, etc. were thinly- or not-so-thinly-disguised spoofs of actual actors from Shakespeare's day.  Or, maybe in keeping with the modern theme, maybe the guy playing Bottom actually played Bottom himself, thus making the whole thing an in-joke like Patrick Stewart or Kate Winslet playing themselves on Extras.  Damn, did Shakespeare invent the self-deprecating cameo too?

This was just my impression in reading the play, however.  As I noted in my write-up of The Comedy Of Errors, Shakespearean comedies really need to be seen to be appreciated*, so I had a much better impression of the Lysander/Helena/Hermia/Demetrius love quadrangle after seeing AMND performed as part of Toronto's Shakespeare in the Park series.  (Fortunately, a bird didn't take a dump on my head this time.)  Still, compared to other instances of Shakespeare setting up a story of lovers kept apart by circumstance and their eventual triumph/failure, AMND's situation is pretty thin, and purposefully so.  Puck's magic love-besotting potion might as well be Shakespeare's pen --- the playwright, after all, is the one who decides which character loves whom, and what the easiest route is to dramatic conflict.  Oberon decides to use the magic potion in the first place to hook up Demetrius and Helena why, exactly?  Because he just likes the cut of Helena's gib**, or because Oberon just wants to take the piss out of Demetrius?

* = By the way, I think I have to see the 1999 film adaptation of A Midsummer Night's Dream simply based on the cast alone.  Kevin Kline?  Anna Friel?  Christian Bale?!  McNulty?!  THE GUY WHO PLAYED WILLY ON "ALF"?!  Take all my money!

** = Helena is the most well-realized character of the four, and is a genuinely funny neurotic mess.  I would definitely watch a sitcom about Helena as a single woman looking for love while trying to have it all in her career as well, this fall on ABC.  I guess this makes it all ironic that Calista Flockhart played Helena in the movie since while I'd watch a Helena sitcom, I sure didn't want to watch Ally McBeal.

It's Demetrius, if you think about it, who really kind of gets the shaft here; he is literally entranced into marrying a woman he doesn't love.  Bit of a dark twist there for a comedy but then again, hilarious asides about Snout/Wall aside, Demetrius comes off as a bit of a dick anyway.  His attitude of "Hey Hermia, you may not love me NOW, but don't worry, you'll come around.  After all, your dad thinks we're a great match!" doth not a sympathetic character make.  Well, at least not a sympathetic character by 2012 standards; 400 years ago, he might've been seen to have a valid point.

Also, in regards to the Lysander/Hermia story, once everything is resolved, the two of them are surprisingly cool with Egeus given his previously-stated threat to kill Lysander and have Hermia more or less enslaved if she didn't follow his wishes.  How big of them.  I guess it's all just a funny story for the kids a few years down the road, about how Grandpa was all set to murder Dad.  We should all also be glad that dukes or similar modern-day authorities no longer have the power to command marriages.  Would you really want Rob Ford to have the final say on who you marry?

When it comes to an overall ranking, I have to give AMND a solid grade simply because everything involving the theatrical troupe was so funny.  I'm sure it won't be near the top of the table once all 38 plays have been read, and really, if you don't like my rankings, just pretend they're all an illusionary dream anyway.  You're asleep right now, as often happens when people read my posts.

It's better that you read these instead of waiting for a weight-loss blog, since brother, that ain't happening.  The 'before' picture alone would break the internet.
Posted by Question Mark at 2:09 PM