The Comedy Of Errors (Shakespeare Re-Read #2)

While the theoretical purpose of this Shakespeare re-read project is to look at the original plays themselves, it can't be ignored that having seen several of these plays actually performed (be it on stage or screen) definitely influences my feelings.  And, as well they should --- they are plays, after all.  They were written not in a vacuum as stand-alone artistic texts but specifically meant to be acted out in front of audiences.  Shakespeare, for all his genius, was first and foremost concerned with getting people through the doors at the Globe Theatre and giving them a night's worth of entertainment for their money.

This issue of performance is very apt when it comes to The Comedy Of Errors.  I first read the play about a decade ago and thought it was such a weave of wordplay, comings-and-goings that it was probably rather hard to follow on stage but worked great on the page.*  Reading it again about six months ago, I had the exact opposite reaction --- now the farce and the jokes seemed a little thin just in reading and decided it would take a strong performance to elevate the text since, on stage, you could actually see all the near-misses and twists of the mistaken identity plot.

* = blame my young naivety for this, but for some reason I saw the fact that the play employed two seats of twins as a major hurdle.  As in, "Gee, how would you ever find TWO pairs of twins who are both quality actors up to the part?"  This was, admittedly, pretty dumb on my part given the countless ways you can make actors who only slightly resemble each other appear to be twins on stage, not to mention the fact that if you just make it close enough with costuming, the audience will grant you a lot of dramatic license.  I dunno, maybe I was terrified by seeing Shakespeare as interpreted by, say, the Sklar brothers.

My new take on COE was more or less proven when I saw a recent staging of the play the National Theatre in London (filmed and broadcast to a movie theatre here in Toronto).  Indeed, the plot acrobatics that seemed a hard sell in reading worked much better in a live setting.  Indeed, the performances gave me a better appreciation for a couple of roles that I'd underrated.  Angelo the goldsmith, for instance, is kind of just one of many obstacles caught up in the confusion of the play, but he was portrayed in very funny fashion by a young Rowan Atkinson-looking actor who did a great job gradually increasingly Angelo's panic over his lack of payment for the gold chain from "ok, look, you owe me some money" to "DUDE, SERIOUSLY, WE ARE ALL FUCKED IF YOU DON'T PAY ME!!  WHY AREN'T YOU PAYING ME!?!?"

The somewhat more major roles of Adriana (Antipholus of Ephesus' wife) and Luciana were reimagined in the show as, essentially, soccer WAGs, possessing that Victoria Beckham kind of style that seems both vaguely stylish and really tacky at the same time.  The trappings underscored this interpretation of Adriana as trapped by her lifestyle, and suddenly her two big centrepiece scenes in both scenes of Act II seemed weirdly melancholy given the play's overall light tone.  While there's a comedy going on around her, Adriana's story is pretty close to a tragedy, perhaps similar to a character like Isabella in Measure For Measure.  Adriana has made several speeches trying to convince others that she still loves her husband, which sound increasingly hollow to my ears -- the lady doth attest too much, methinks.  By the time COE comes to a close, she's still stuck with Antipholus of Ephesus, who is philandering, violent and easily-enraged.  Rough deal for Adriana.  Shakespeare was more liberal than most playwrights of his era in giving female characters a voice and a sense of worth, but you'll still find cases like this where our modern sensibilities definitely clash with borderline-misogynistic stuff that was literally just played for laughs 400 years ago. 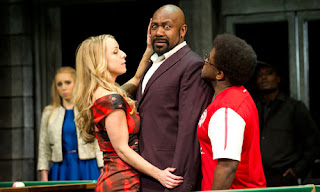 Though, we live in an era of Two And A Half Men, so who are we to talk?  Strange as it sounds, COE is essentially its equivalent, a sort of "sitcom Shakespeare" was meant as completely light, farcical, bawdy entertainment.  Generations of critics have pored over every line of Shakespeare's works looking for hidden meanings, but you'll occasionally find a liner note that's just simply something like "he is saying she's fat," like how you'll find when the Dromios are unleashing one of their several volleys of insults about Luce.  Comedy Of Errors is a nihilistic joke-delivery system where you're not really supposed to like or even relate to any of the characters, just laugh as they're tossed around by the confusions of the plot.  You can maybe find some sympathy for the long-suffering Dromios, and it's telling that they are the ones who close the play.  The Antipholuses are both varying degrees of asshole, as while Antipholus/Syracuse is the better of the two, he's still pretty quick to accuse his servant of treachery and beat his ass (again, something which audiences in Shakespeare's day wouldn't have batted an eye at).  Antipholus/Syracuse is also the kind of guy who, when confronted with a seemingly crazed woman who insists that he's her husband and begs to stay with him, reacts with literally, "Man, she seems nuts, but I might get laid, so let's play it out."

There was a time when I actually considered COE to be among my very favourite of Shakespeare's plays, but though we're very early in the re-read process, it's definitely going to fall down the rankings.  While it sounds as if I've been hard on it, COE is not a bad play.  To compare it to the other play I've covered thus far, COE is a tighter, more coherent and more straight-forward piece than Coriolanus, though the latter has much more depth --- COE is the better play, Coriolanus is the more interesting play.  You can discuss Coriolanus all day but sometimes, you just prefer a bit of froth.

RANKING THE PLAYS THUS FAR
2. Coriolanus
1. The Comedy Of Errors

It's better that you read these instead of waiting for a weight-loss blog, since brother, that ain't happening.  The 'before' picture alone would break the internet.
Posted by Question Mark at 3:30 PM